Can I Leave LED Lights on All Night?

Can I leave LED lights on all night? This question is quite common among many concerned homeowners. It’s not unusual. And indeed, led light can be left on for very long periods, even overnight. That is solely owing to their low power consumption and low heat output. That makes them well suited for use as night lights, Christmas tree lights, porch lights, and background accent lights.

Is It Better to Leave LED Lights On?

There is no difference in terms of saving money or the brightness of the light if you decide to leave led lights on, or opt to turn them off.

Therefore, leaving led lights on is neither good nor bad.

It is your decision whether led lights stay on or are switched off. Unlike other lights, led bulbs do not need a few minutes to become bright enough to use, so it makes sense to turn any light off when it is not in use.

If you have led lights fitted in larger buildings, consider having these on sensor switches that turn on when people are in that part of the building, and that will switch off when there has been no movement for set amounts of time.

If you have led lights at home and you are out or on vacation, you can use timers that the lights come on when you are away, making the property more secure.

Why Leaving LED Lights on All Night Is Not a Big Deal?

Compared to the standard fluorescent and incandescent lights, LEDs consume the least amount of electricity. To bring this to perspective, a LED equivalent to a 60 W bulb will only draw close to 6W.

You can do your calculations and realize that, in the long run, you save quite a significant amount of money monthly and even annually. A standard light bulb, on the other hand, will cause a considerable dent in your wallet.

But all customers should be aware that the advertised life expectancy of the LEDs by the manufacturers is not likely to be the case as they are usually measured in optimal conditions, and some factors are considered. All the same, any Led will surely last you years.

Over an extended period, LED lights have been the go-for option for many people. Particularly during holiday celebrations. These energy-efficient lights have been used for Christmas more often than not.

They have a cool-feel nature hence less susceptible to causing fires. Instead, the worst they can do is only dim after some time. Just light up your Christmas tree, and you can leave it on for as long as it can be, albeit this is not highly recommended.

If you have quality LEDs, you will not have to worry about continuously running the lights, among other issues. They are also known to represent no hazard to the human eye.

Night lights come in handy for your children if they need to get up in the middle of the night, and porch lights can serve to keep burglars at bay. A Christmas lit house is also a beautiful sight. Those are but a few applications of the LED lights.

How Long Can LED Lights Stay On?

In theory, led lights can stay on for long periods of time, with little financial cost.

As these lights only use a small amount of energy leaving led lights on for prolonged periods would be possible, especially if the bulb was in a ceiling fixture as opposed to been in a lamp powered by an adapter.

Due to the way, led lights are made the bulbs can last for years, though it is difficult to pinpoint how long each bulb would last.

There is the potential for led lights to last for between 50,000 and 100,000 hours depending on their make, precise function and how long they are left on continuously.

Although led lights can be more expensive when first brought, they last longer, cost less to power, and are safer than any other type of bulb.

Is It Safe to Leave LED Lights on for a Week?

Depending on how the light is powered, it is safe to leave led lights on for a week.

If the led lights are screwed directly into a socket in the ceiling, it is fine to leave it on non stop for an entire week as there will be no fire risk.

In theory, led lights that do not use adapters or transformers could be left on for longer than a week. Use your discretion, if the lights do not need to be on then switch them off.

People that have led bulbs in table lamps and bedside lamps may not want to leave these on around the clock for a week if they are away on vacation.

Instead, it would make more sense to have the lamps set to go on and off by using a timer, especially from a security perspective.

What Does Red LED Lights Mean at Night?

The use of red led night lights at night mean that people will find it easier to relax and then will go to sleep longer. The aim of using a red led light at night is to get to sleep sooner and to have a deeper and more relaxed sleep.

Exposure to red light in the evening will relax you better and put less strain on your eyes than white or blue lights, the most common forms of light given out by every type of light bulb.

Therefore, the use of red led lights at night should be encouraged to help you sleep better, to improve your mood and to protect your eyes. 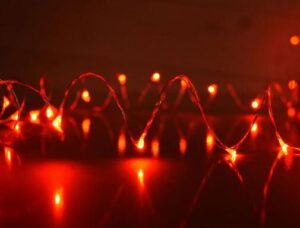 The bright blue led lights used in laptops, PCs, smartphones or tablets should be avoided for at least an hour before you try to go asleep.

Switch on the red led lights one or two hours before bedtime in order to relax sooner and further, making it easier to get to sleep.

There is a strong scientific reason why switching to red led lighting improves sleep, it stimulates the production of melatonin, the hormone that makes people feel tired and lets them get deeper sleep.

What Are the Potential Dangers to Consider?

In as much as the LEDs are the safest lighting options, there are cautions you should take, especially if you are dealing with low quality and cheap LEDs. These types are known to have a reduced heat dissipation capability.

If left unattended for a long time, the LEDs could get hot, and probably start a fire. Therefore, you are advised to note how they behave before you can leave them on for long periods. You wouldn’t want a fire to ruin your holiday or burn down your house.

Do LED Lights Get Hot Enough to Start a Fire?

In a single word, no. Even if left on for a longer period, led lights do not get hot enough to start a fire, as they are the type of bulb that uses the least amount of energy, and would not create enough heat to set nearby flammable materials such as paper on fire.

Although led lights do not get warm enough to start a fire, if adapters or transformers are used to power the bulbs then those could get hot enough to become a fire hazard.

When adapters or transformers are connected to led lights, then you will need to consider where these can be placed to reduce the risk of causing fires. The lights should also be turned off on a regular basis to prevent adapters and transformers from over heating.

Yes, LED lights can be left on all night. You should, however, be careful and be keen on the cautious factors stated above. Also, if not necessary, then do not leave them on for a long time. You will find out that it does add a few dollars on top of your electricity bill at the end of the day.