What Color LED Lights Should You Sleep With?

We all know how precious a good night’s sleep is. There are varying reasons why many might find themselves awake at night.

Regardless of the scenario, it can be challenging getting back to sleep. Research now shows that the reason why many people find it hard sleeping at night may be associated with the lights they’re exposed to before bed.

This article shows you up what color led lights should you sleep with.

We picked the best led sleep lights for you:

With Reddish Light to Trigger Your Melatinon, and Dusk to Dawn Sensor for Auto Illumination: Emagine A Plug in Night Light

Scientists believe that reddish or orange light soothes the eye to induce sleep. This is because our eyes have bluish-greenish light, which helps us distinguish nighttime and daytime.

This means that your eyes don’t have the light frequencies that give out daytime signals in red or orange-toned light. 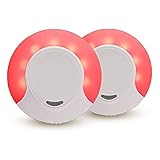 What Color LED Lights Should You Not Sleep With?

The answer is simple; any bright light is bad for sleep. This is because the human body produces melatonin, which is a good hormone for sleeping. Towards the end of the day, your body tends to produce increased levels of melatonin.

Exposing yourself to bright light can reduce melatonin production, thus impacting your sleep. Whenever people wake up at night, the first instinct is usually to turn on the lights to see well.

Scientists say that your brain is set to a different rhythm at night than during the day. If you switch on a bright light, the light travels to the brain for your eyes, thus throwing it off its rhythmic natural clock.

Is Purple Light Good for Sleep? 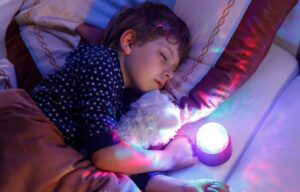 The research revealed that the mice exposed to purple light showed a delay in sleep, with the mice’s onset of sleep taking 10 minutes in contrast to green light, which took 3 minutes.

The scientists concluded that melanopsin, the blue light-sensitive pigment in the eye’s retina, affects how we react to artificial light. The only flaw to this is that as opposed to mice, we aren’t nocturnal.

Is Red LED Night Light Good for You?

Several clinical trials support the theory that red night light helps people sleep better. The logic is that the red light has a lower color temperature. When you’re exposed to it, it soothes you to sleep without necessarily jolting your body’s internal clock.

Researchers in Brazil conducted red light therapy on patients suffering from migraines. The scientists uncovered that the red light greatly reduced the number of headaches.

They also realized that it was the only treatment, among the many they tried, that significantly helped the patients with sleep disorders.

A 2013 study conducted in Taiwan on patients with sleep disorders assessed how their electrical brain activity was before and after getting exposed to red light therapy. The scientists concluded that the red night light was conducive to falling asleep.

Plenty of research has been conducted on the effect of red light on the human body and sleep patterns. Most of the analyses concluded that red light therapy is a non-invasive therapy that effectively treats sleep disorders.

Whenever you wake up at night and flip the lights on, your body gets jolted from its melatonin production.

Exposing your body to bright light after dark interrupts your body’s melatonin production, which in turn increases the time it would take you to fall asleep again.

The major reason why many people feel energized anytime they wake up in the morning is due to the exposure to the intense blue light coming from the sun. Blue light wavelengths are very powerful in your sleep and wake body cycle as they boost mental sharpness and alertness.

However, scientists warn against exposing yourself to excessive amounts of blue light. This is because the human eyes are not great blockers of blue lights. This means that all the light goes through your eye to the retina, which works with your brain to translate light around you into images.

The most common exposure to blue light is our mobile devices. Researchers estimate that many Americans spend at least 7 hours of their day staring at electronic devices of any kind, and extra hours at night before bed.

While the light on your phone may appear like a white light, they produce wavelengths of up to 500 nanometers, which qualifies as blue light.

The best thing to do is to try not to stare at your phone 3 hours before bedtime.

What Are the Different Types of LED Night Light for Sleeping? 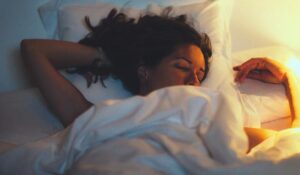 The study mentioned above on mice revealed that the mice responded well to green light and mildly to purple light compared to blue light.

This means that red, green, and orange-toned lights are the best for inducing sleep as they create a conducive environment for your body to produce the sleep hormone melatonin.

If you also experience restlessness before or during sleep, studies show that having warm-toned LED lights help you feel more relaxed.

In case you find red to be too colorful for you, you can opt for a pink light or a yellow one or merge two colors to form a warm red to best suit your preference as well as help you sleep better.

Lack of a good night’s sleep results in fatigue, which results in a less productive day. As revealed above, the lights we’re exposed to before bedtime play a significant role in how we sleep.

Always ensure that you cut back on bright lights before bed. A healthy sleeping pattern allows you to have a productive day and a healthy lifestyle.