What Is a Himalayan Salt Rock Lamp? 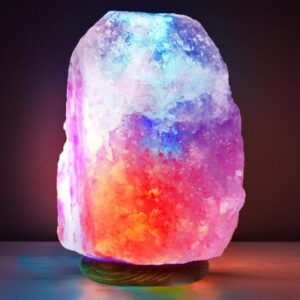 These glowing pink crystals, mined in the mountainous regions of Pakistan, claim to reduce stress and anxiety, decrease fatigue and even soothe the symptoms of asthma and some common allergies.

While not everybody can agree on what these salt rock lamps are capable of, there’s no denying their soft, soothing beauty.

When active, a small bulb inside the chunk of salt rock causes it to emit a diffused pink glow. It’s great for bringing calm to a bedroom or adding mystery to a den, lounge or office.

This article explores some frequently asked questions about Himalayan salt rock lamps to help you determine if they’re right for your home.

What Is a Salt Rock Lamp?

Salt rock lamps are fully formed pieces of Himalayan pink salt with a small lightbulb placed inside. This bulb can be switched on and illuminated just like any regular lamp. However, because it’s inside a pink crystal, it emits a unique rose-colored glow.

Salt rock lamps are normally purchased as single rock crystals that have been hollowed out to make space inside for the bulb. Less commonly, they’re made up of multiple small salt crystals arranged in a basket around a lightbulb.

What Does a Himalayan Salt Lamp Do? 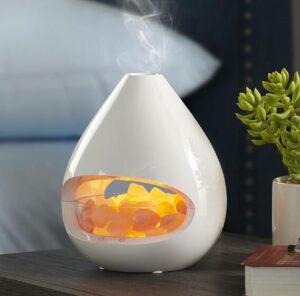 The various health benefits attributed to Himalayan salt rock lamps are explained by the mineral’s purifying effects on indoor air.

The pink salt is said to have a high level of hygroscopicity allowing it to actively remove moisture from the atmosphere. This preserves indoor air quality and captures airborne pollutants and allergens thought to cause irritation to those with sensitivities.

By emitting negative ions which are actually beneficial for the body, salt rock lamps are to improve health overall.

What Is a Salt Lamp Good for?

People buy Himalayan salt lamps for their homes because they believe this particular mineral, with its unusual color and chemical composition, actively ‘cleans’ the indoor air, reduces the symptoms of mood disorders, oxygenates the brain and even improves sleep quality.

The health benefits of salt rock lamps relate to an ability to remove negative or potentially harmful substances from indoor atmospheres and replace them with positive ones.

This is why they’re so popular with allergy sufferers, many of whom use salt rock lamps to alleviate persistent symptoms such as congestion and watery eyes.

What Bulb Can I Use in a Salt Lamp?

You should always match the power of the light bulb to the size of your salt rock lamp. The larger the crystal, the more powerful the bulb needs to be to shine through and emit that romantic, soothing glow.

Here are some useful guidelines:

If you’re unsure, look closely at the bulb your salt lamp originally came with and purchase the same type again. 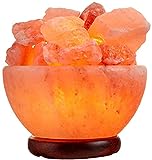 What Is the Best Salt Lamp?

Salt rock lamps come in a wide variety of shapes and sizes. The most common type is the natural, unrefined crystal lamp that is minimally shaped or not shaped at all.

These are very organic looking structures designed to appear untouched, as if they’ve been lifted right out of the Himalayan mountains. These ‘one chunk’ crystal lamps can be small or as hefty as 15kg and upwards.

The largest Himalayan rock salt lamp on sale today weighs a staggering 636 lbs and can be purchased in North America.

The size of a pink salt rock lamp is thought to determine its degree of hygroscopicity and the amount of negative ions it emits. The bigger your lamp, the greater its health benefits. Although, an overly large lamp in a rarely used space can cause the atmosphere to dry out and become uncomfortable.

Most people choose single ‘piece’ salt rock lamps with a hollow in their middle for the bulb. However, you can also purchase basket style Himalayan lamps made up of many small pieces of salt. There isn’t much difference between these two styles.

For most homeowners, it’s simply a question of design and what complements the decor of a bedroom or office.

Basket style lamps are a little easier to move, handle and operate because you don’t need to access the inside of the rock to replace the bulb. They may also have artificial decorations, interesting supports and other aesthetically pleasing features.

This is unlike unrefined lamps which are meant to look as natural as possible.

The best Himalayan salt lamp for you really depends on how powerfully you want it to clean the indoor air, what type of decor it needs to match with and how much money you’re happy to spend on the purchase. 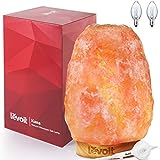 How Long Will a Salt Lamp Last?

There is no definitive expiry date for Himalayan salt rock lamps because salt is a naturally occurring mineral. In moderate conditions, it can last for hundreds of years.

Longevity really depends on how well the lamp is cared for, and whether it is handled in a way that prevents cracks and fractures.

When people say a salt rock lamp is broken, they usually mean a piece of the mineral has broken off or its electrical components have become damaged in some way.

Lamps with dysfunctional electrics can be used indefinitely if the worn parts are replaced.

With perfect care, there is no reason a Himalayan salt rock lamp can’t be used by three generations or more.

How Long Can You Leave a Salt Lamp On?

Himalayan salt rock lamps are designed to be used constantly. In fact, the recommended minimum use is sixteen hours per day to prevent excessive sweating.

As the bulb inside is necessarily low powered, it’s much less of a burden on home energy bills than most people think. It’s still something to consider before investing in one of these fixtures.

It’s normal for people to leave their salt lamps on overnight in the bedroom. However, if this is likely to disrupt your sleep, switch it off but place a small plate or tray underneath to catch leaking water.

How to Use and Clean a Himalayan Salt Lamp? 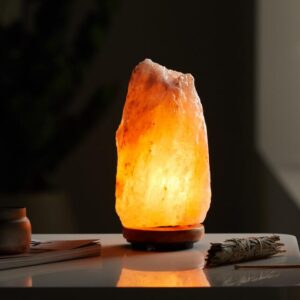 Salt rock lamps are surprisingly easy to maintain. To clean the exterior, just wipe gently with a dry cloth. Even though the cloth is dry, you should still unplug the lamp before handling it for safety reasons.

If there are stubborn stains or grimy patches that cannot be removed with a dry cloth, add a small amount of water. Make sure you wrong the cloth before use. It should be slightly damp, never wet or dripping.

Using the abrasive side of a scouring sponge is okay so long as you regulate your pressure and don’t rub harder than you need to.

Turning the lamp back on is the easiest way to dry off excess moisture after cleaning.

When changing the light bulb, your salt lamp should be unplugged. If the bulb seems to be blowing far too frequently and you’re going through too many replacements, you’re probably using the wrong type of bulb.

The health benefits associated with salt rock lamps are only provided by those containing genuine Himalayan minerals. They are made of a specific type of pink salt extracted from mountainous regions of Pakistan. If the salt rock in your lamp is not genuine, it’s unlikely to produce the same benefits.

Here are some simple ways to differentiate genuine Himalyan salt from fake articles:

– Real Himalayan salt rock lamps ‘sweat’ when they’re not being used frequently enough. The water absorbed from the atmosphere evaporates at a much slower rate when the lamp is switched off and its heat source has been deactivated.

Authentic salt rock lamps leak small amounts of water for this reason. If yours never leaks, particularly in high humidity areas, it might be a fake.

– Himalayan salt rock lamps can appear whitish in places as salt from evaporated water accumulates on their outer surface. Regardless of how this looks, the rock inside does not change and remains a rosy pink.

Almost all genuine salt lamps are pinkish orange in colour apart from the rarest and most expensive specimens.

– There are some very rare white salt rocks on sale, but they are very expensive. If you see a white lamp being sold for a similar price as standard pink lamps, be suspicious. There’s no reason it would be sold so cheaply if it were genuine. 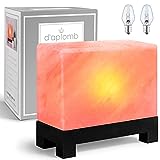 The most important thing to know about these Himalyan salt rock lamps is that they’re persistently active. While the rock isn’t alive in the truest sense, switching it off won’t stop negative ion emissions or prevent the salt from absorbing water. It just removes the heat provided by the light bulb.

When the heat is removed, the salt rock continues to absorb water. However, it doesn’t evaporate in the same way. Instead, it collects on the outer surface of the rock and makes the lamp appear as if it’s sweating or leaking.

This is normal, but the leakage can start to corrode surfaces and surrounding materials if persistent. It’s why Himalayan salt lamps are designed to be used constantly.

You can leave your salt lamp on 24 hours a day, and it will not produce ‘sweat’ because the water is being captured, then evaporated.

The minimum amount you should use a Himalyan salt lamp (to avoid excessive sweating) is 16 hours per day. If you’re leaving your home for an extended period of time, switch it off but wrap it in plastic to reduce leakage while it’s inactive.

If you never witness any degree of sweating or water leakage from your Himalyan salt rock lamp, it might be a clever fake. This type of reaction is natural to the rock and nothing to worry about it. In fact, it’s evidence that your lamp’s hygroscopic, air cleaning qualities are active.

#3. Why Is My Salt Lamp Turning White?

It’s common for Himalayan salt lamps in humid spaces to begin turning white. This is not a major problem and it can be easily remedied.

It happens because lots of water has been captured from the atmosphere (as intended) and evaporated by the heat-producing light bulb inside the lamp.

As water evaporates, pearly calcium deposits sometimes get left behind on the rock’s outer surface. This may cause the lamp to appear whitish in places. It’s not a sign that your Himalayan salt lamp is broken or that it’s a fake.

It’s just something that happens when the mineral takes in lots of water.

To restore the salt lamp’s beautiful pink hue, rub at the outer surface with a moist cloth. Don’t rub too hard. Just gently rub away at any rough white crusts. Alternatively, you can allow the lamp to continue naturally evolving.

The calcium deposits should not affect its air cleaning qualities or its soothing glow.

#4. Why Is My Salt Lamp Shedding Salt?

It’s normal for Himalayan salt rock lamps to collect whitish salt crusts. This is a product of evaporation and very common for lamps in high humidity atmospheres that are doing a lot of work to clean the indoor air.

These calcium-based deposits are normal and can be easily removed with a moist cloth or sponge. Some degree of salt shedding from the salt rock itself is acceptable due to low humidity.

However, your lamp should never appear crumbly or look like it’s losing large chunks of material. If this happens, it might be a sign that the salt rock is inauthentic or of unusually poor quality.

Hopefully, this guide to what is Himalayan salt rock lamp has given you the knowledge needed to purchase, maintain and enjoy a beautiful, genuine Himalyan lamp and all its many benefits.

Whether you’re attracted to these soothing pink rocks because they promise better health and an improved mood or just because you think they look magical, you should now have the confidence to cherish yours.